What do you do when God asks for something you don’t think He should?

Great question. Our response to it is not as intellectual or noble as we’d like to think…

We’ve all shared the outrage when someone in our lives asked for something that they shouldn’t have. We all have regrets from giving them what they’ve wanted, you’d have to have an unusually clean situation growing up to have avoided it.

My dad told me one time that if he gave me a gift or helped me with something I could turn around, sell it and make a profit the next day if I wanted to. I probably don’t need to say that this is not normal, he is an amazing man in so many regards. He was sending the message that his “stuff” couldn’t own him and would never come between us. I learned the importance of family and boundaries at a young age and, as you can imagine, I don’t struggle with some situations most of us do. What a terrific gift to get from your dad!

I did make a major purchase from a relative that didn’t go as well as I had expected however. This is a little more awkward and I was more than a little shocked by the growing sense from this person that there were some strings attached to the “stuff”. In fact, they starting attempting inroads to my relationship with my wife and daughters that they had no right to. It was indecent. It was wrong. It got a bit messy and still is.

When I think about it a feeling comes over me that I don’t like, almost outrage but definitely like I’m expected to do something or be someone that needs their approval. Why? They asked not only for something I shouldn’t give but something I couldn’t.

But what do you do when God asks for something you don’t think He should? 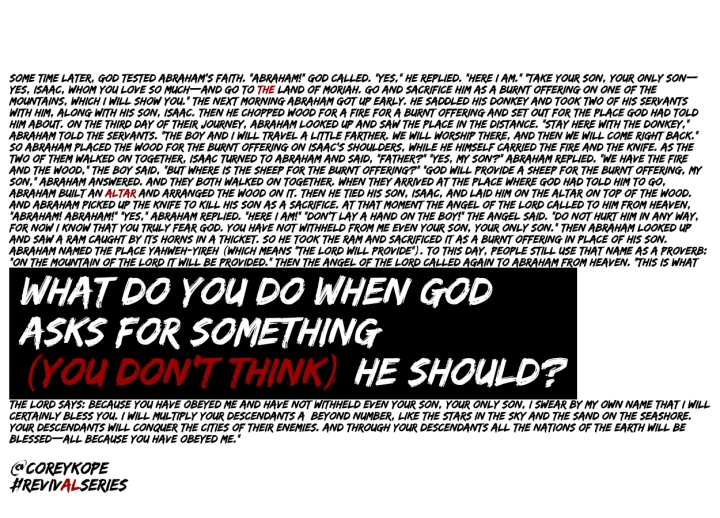 WE TRANSFER OUTRAGE.
From that person to Him. Most of it is unconscious but we’re still on the hook for what it makes us do.

Here’s the thing. They wanted something FROM you. God wants something FOR you. Time to change how we think… When your feelings tell you that the one making the request can’t be trusted because it’s a heavy ask and it feels indecent, you make a secret decision without even knowing it. Your heart says a quiet, polite “No”.

Genesis 22(NLT) Some time later, God tested Abraham’s faith. “Abraham!” God called. “Yes,” he replied. “Here I am.”
“Take your son, your only son — yes, Isaac, whom you love so much — and go to the land of Moriah. Go and sacrifice him as a burnt offering on one of the mountains, which I will show you.”
Abraham replied with a polite “No thanks”
(I just added that to make you feel better. He’d already said yes before the indecent ask was made, he was a little stuck and had to go through with it.)

Now you’ll have to read the end of the story to understand it, I’d really recommend watching this particular sermon because it will make much more sense, but what I want to pick up for our purpose here is the sense of …

Unless you have teenagers and sort of want to murder them some days (Oh don’t jump down my throat, this is called a JOKE. Unless you actually have teenagers, then you know what I mean..), you would feel exactly what Abraham would be feeling.

The video sermon gets deeper and connects this sacrifice “ask” to what happened with Jesus’ sacrifice on the cross, even down to where God asked Abraham to journey to do the deed with his son Isaac. And the beauty is that you and I can read the end of the story and know full well that God redeemed the whole thing and, from Isaac, the nation of Israel was born. None of this helped Abraham on this three day journey to hell walking beside his son.

Somewhere along the way he came to grips with the ask and trusted God with it. I don’t know how he did it, but he did it. He had to lay down all the outrage, all the reasons against, all the “God doesn’t ask for things He shouldn’t”s, all the pain, all the fear.

He had to be willing to sacrifice the dream to prove that the giver of the dream was MORE to him.

He had to change his mind.

What God was really asking Abraham for is what He is really asking us for today. The ASK went so deep that it cuts right down to the place where we made a vow long ago about how far we would go, and even how far we could go. Nothing but a wasting pain can expose that vow. Nothing but pressure on pressure. Madness on madness. Fear on fear. Time over time.

The Holy Spirit wants to go down there with you, expose that vow and outrage, and bring freedom from it. The pain will be excruciating, but what really happened when you made that promise is you build a secret room that only you had the key for, and then built the rest of your life around it. That’s why your house is a little off-centre and unstable. All the behaviour of all of these years had a backbone that wasn’t really owned by God. It was owned and controlled by you. They could take everything else from you, but not this thing.

God has His eye on that room and is saying “I’d like the key to it please. Trust Me”

Do it. Expect your sense of security to flee, but we have to empty our cup for God to fill it with Himself.

One thought on “When God asks for something he shouldn’t”