What has been dead and needs to come alive in you?

Being a man, my funniest stories are also naturally paralleled with dodging proverbial bullets. Actually real bullets now that I think of it.

My best friend Steve and I used to shoot pennies placed in a fence post from a foot away with .22 rifles. Why? … Great question… I can only think that it must have seemed like the thing to do at the time? Pennies look amazing when a bullet has struck them, but WHERE DOES THE BULLET GO AFTERWARDS? Another great question! Where were YOU when Steve and I had .22 rounds zinging past our ears, saying a relieved “Whew!” and dipping into our pockets for more pennies?

Had a paramedic been called to the scene for one more ridiculous accident involving teenage boys whose brains were obviously underdeveloped (and maybe still are), what would we have told them?

No idea. That’s why men are so great.

There are five steps a paramedic follows when trying to shock someone’s heart back to life. These are not unlike the steps we should follow when God tries to revive something in us that is dead. From marriage to parenting to business and money. We face death all the time and spend most of our lives either killing things, or trying to revive them in our own strength. But raising the dead to life is what GOD does best! 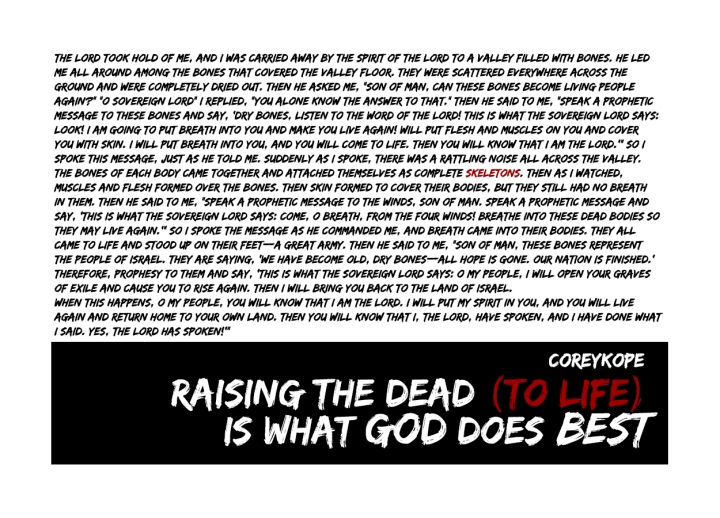 These steps are something you may want to consider for yourself. I need to warn you that they will not come naturally. We’re discussing specific issues in your life where you are losing badly because you have done what has come naturally and it’s not working…

Until we say out loud “This thing is dead” you will continue in the patterns that got you where you are now. Sometimes we need to get off the dead horse, or at least admit that the thing you feared losing most is actually lost in reality. It is maybe the most painful step and requires outside truth and awareness (the two things that flee first) as well as humility to admit defeat.

Step 2. Turn on the Defib. Follow the Voice Prompts.

You and I have been speaking many words and they have not resulted in what actually needs to happen. We need to get quiet, turn on the power switch of the Holy Spirit which means giving Him access to us, and follow the voice prompts. These prompts come from the word of God and our prayer times, but also from the people God has given to us. In my experience, when we get really really stuck we start hearing twisted versions of truth even reading the bible and praying because they pass through a common filter… ME.

I’ve heard people in messed up situations tell me the Holy Spirit told them this or that to do and I have walked them through how close it was to the truth, but how it was actually the counsel of the dark side of the force. Why? We never think we can be wrong. I told a young lady whose husband had had enough of her (and he was mostly right in this case) that if she went out and did what she’d just told me “the Holy Spirit had told her to do”, that he probably should leave her. Sorry, just a real pastor in a real world. She’d been listening to twisted voices for so long that she honestly thought that’s what the Holy Spirit sounded like! If I told you the story you couldn’t help but agree with me. Thankfully she humbled herself, took my counsel, and they pulled through it. Just follow the dang voice prompts, but make sure they are the right ones. If experienced ministers would not agree with your independent plan of action, perhaps you would do well to listen? They have watched hundreds of people just like you make decisions just like THAT. They know what comes next.

Attach the paddles over the heart of the matter. Sometimes the heart of the matter you find yourself in has to do with fears from your past. Pride. Self preservation. No control. My most recent hellish experiences touched chords from my childhood. The worst fear I face is being backed into a corner where someone could destroy me and I couldn’t do anything to stop them. Painful stuff. Things nightmares are made of. There is a core inside of you that is touched in these times that you need to recognize. I’d told myself “No one will ever make a victim out of me again”. This was not something physical that happened but spiritual and is a much longer story… I had amazing parents but they couldn’t stop it either. If you’ve kept a piece for yourself like I had, God will someday whisper “I want THAT piece too”. Not that piece God! Open up and stay vulnerable, it’s the only way through the valley of death.

Take you hands off the matter.

Step 5. Deliver shock. Watch God do what only God can do.

Then he asked me, “Son of man, can these bones become living people again?”

“O Sovereign Lord, you alone know the answer to that.”

Then he said to me, “Speak a prophetic message to these bones and say, ‘Dry bones, listen to the word of the Lord! This is what the Sovereign Lord says: Look! I am going to put breath into you and make you live again! I will put flesh and muscles on you and cover you with skin. I will put breath into you, and you will come to life. Then you will know that I am the Lord.'”

“You cannot have back your time; but there is a strange and wonderful way in which God can give back to you the wasted blessings, the unripened fruits of years over which you mourned. The fruits of wasted years may yet be yours.” Spurgeon.

The tough part is trying to believe in something. one. more. time.